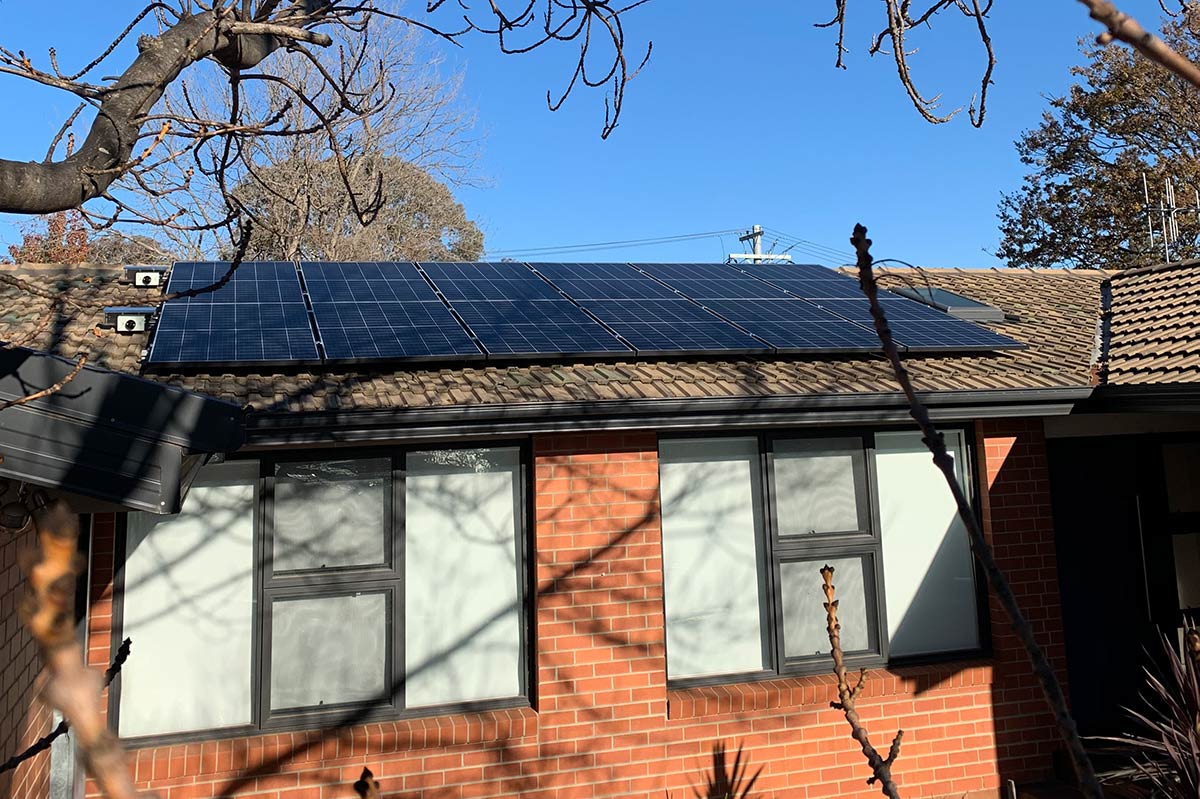 Solar Power One Year On

Our solar power was installed on 27 May 2020. Shortly after we were able to disconnect completely from natural gas as heating was our only gas appliance. A year on, I thought I’d talk a little about our experience.

ECG Electrical in Canberra installed quite a large array for us at just over 10Kw with an 8Kw inverter. We have panels on three roof surfaces so we have arrays angled roughly NE, NW and SW. 32 panels in all. We have some shading issues so we opted for individual micro-inverters on each panel so that the array as a whole is not affected by the partial shading of one or two panels.

The generation of the system has been excellent. We’ve produced about 13MWh in total over the year. Our solar app tells me that is the equivalent of planting more than 150 trees and we’ve saved over 5000kg of carbon from entering the atmosphere. Heartwarming stats!

By the way, we opted not to install a battery at this point. They are still very expensive. We did the numbers and it just didn’t seem worth it for now. Even after seeing how much electricity we are exporting and that, in the winter, we need a lot of power when the sun isn’t shining, it is not yet worth the investment for us.

We now run the dishwasher during the middle of the day, after the sun has risen high enough that our panels are generating nicely. As I work from home, this is easy to do but we do have a delay timer on the dishwasher that we can employ too.

Likewise, we have moved from putting on a load of washing in the evening, to washing during the day. Again, we employ the delay timer function on the washing machine to achieve this. We can still put the load in the machine in the evening as we had been but we set the timer for the load to run the following morning.

Just prior to our solar power installation, we also changed our ageing gas heating system over to an electric reverse-cycle air-conditioning system. Over this past summer we have not needed to use the cooling much at all, perhaps about 5 days in total. We still have ceiling or pedestal fans in every room which are as much as we need most days. I’m sure that if we had our system over the 2019-20 summer, we would have used it much more, particularly as we could not open the windows due to bushfire smoke for a good many days (and nights).

Our strategy with the air-conditioning cooling, however, is to be somewhat preemptive about it. We turn it on earlier in the day rather than wait for the house to get very hot. This means the system doesn’t have to work hard to cool the house down again and it is working during sunlight hours. We try to turn it off after the solar panels stop generating and use the ceiling fans instead. We also open the windows when the air outside cools.

It is quite a different story with heating. We need heating primarily during the times when the sun is not up. The heating is off overnight but the house needs to be warmed up in the morning before we get up and then warm during the evening when we are home, both times when the sun isn’t shining. Even though I work from home, we tend to keep the heating off during the day. I wear extra clothes and might wrap myself in an electric throw if I need it. The change we have made to maximise our self-generation is that the heating comes on at 3.30pm (rather than 5pm for the gas) to warm the house using the final hours of sunlight. Canberra has cold winters so heating is our biggest electricity use by far.

The other spike I see with our electricity use is cooking our evening meal. Cooking in the evening is a habit I haven’t yet managed to make much of a change to. In summer we generate power until much later in the day, of course, due to daylight savings. We are notoriously late dinner eaters though so mostly we are cooking with power from the grid. Sometimes I do use the slow cooker but I really do need to get savvier about using solar energy for cooking.

Our old gas heating system was very inefficient and expensive. Although we use a lot of electricity from the grid to heat the house with the reverse-cycle air-conditioning, I have calculated that we are still ahead. The savings we make in the summer more than make up for the extra electricity use in the winter.

We have an 8c/KWh feed-in tariff. That is not the highest around but it does knock a couple of hundred dollars off our summer electricity bill. We are locked into using our provider (and the 8c feed-in tariff) for 2 years post air-con system installation because we were offered a rebate on our electricity bill of $2000 over two years to make the switch.

Our old gas system was becoming increasingly expensive to run so despite using a lot of electricity in winter now to run our heating, our savings have been good. Our only gas use was heating so obviously this went up and down through the year. Averaged out over the year, we were using about $700 worth of gas every quarter. Our electricity use, pre-solar, was around $600 per quarter.

This past year, our electricity bill has averaged just over $300 per quarter (without factoring in the rebate for our switch from gas to electricity). That is a saving of $1000 per quarter. That is quite a staggering saving!

So overall our solar power experience has been great. We’re really happy with the return we are getting – clearly! At this rate, we should reach pay-back in around 7 years.